For those new to the series, X is the third project diva game on the Playstation Vita. The two others are f and F2nd, which are the same game for the most part with different song lists and minor changes. The basic gameplay is a rhythm game based around the playstation shape buttons, hitting the right notes in time with the music. You can watch a few gameplay videos or try to the demo to find out if it clicks for you or not pretty quickly.

This review is written from the perspective of a fan of the series, who has platinumed both f and F 2nd. Prior to X’s release I was still frequently playing f and F 2nd, and often going to the arcade to play that version. X made a lot of changes to the classic formula, thus being called X and not F 3rd. I’m all for brining some new ideas to the series, but for the most part the changes made in X are step backs. There is a lot more reliance on equips and RNG luck over rhythm game skill. I think this is taking the series in a direction I don’t really want to see. So let’s get right into it… 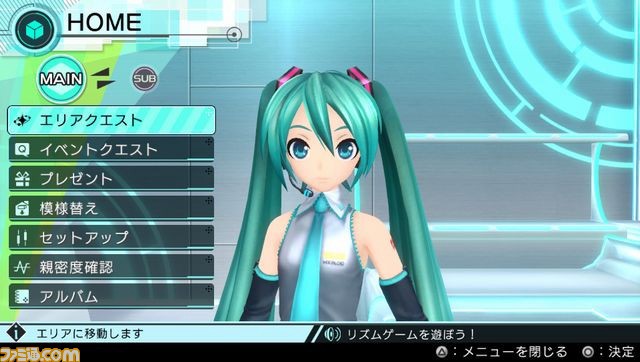 This game introduces a new game mode called “area quest” which replaces free play more for the most part. Free play still exists but it’s mostly an afterthought, you won’t be playing that mode if you want to progress on the game’s extremely long grind. Free play is required for 2 trophies but besides that, is not required for anything at all and there’s no way to progress on the game’s objectives in free play. X removes diva points, which are usually earned in songs and used to purchase modules, presents, accessories, etc. Instead everything in X is a random drop at the end of a song. Entirely random. Yes, this is awful. 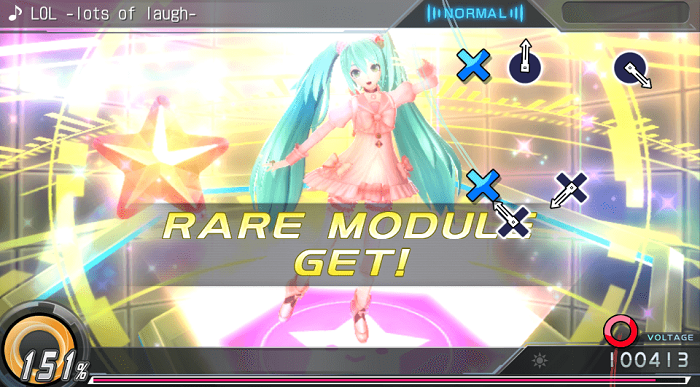 If you clear the chance time section of a song, you are granted a random module. And the modules, which are normally cosmetic now serve functional purposes in area quest mode. And by no means are you guaranteed a new module every time. You’ll find once you get a few in your library you’ll frequently get the same modules again, and this is extremely frustrating if you want to go for 100% module completion of modules. In past games you were able to buy modules at will from the shop.

Area quest mode is very different from normal free play, you have a voltage meter which raises the percentage of return on correct notes. There’s “voltage raise” notes outlined rarely which will raise it more than other notes. There’s no life bar which means you can’t fail by missing so many notes in the middle of a song, you just won’t pass the requirement at the end.

Also they’ve separated out the modules and songs into 5 groups: cute, cool, neutral, chaos & beauty. If you equip a module and accessories of the matching element you can gain boosts of up to 60% on your score. If you don’t have the maximum 60% boost you’re SOL on some of the harder challenges. Which is making the game more about RNG and equips than actual skill.

When I briefly tried playing Love Live! on iOS I was turned off because the game was not very skill based, I would still get rank C scores even with full combos in that game because I didn’t have the right cards. And that’s why I never got into it. I fear that this series is heading in that direction (possibly because it’s more profitable) which worries me.

The module skills are a nice idea to make the game into an “RPG” but fail badly at being balanced or interesting at all. Once you get the right modules the only ones that are worthwhile are “new module up Lv4” which increases the chances of obtaining a new module, and “voltage note up Lv5” which increases the frequency of the notes that bump your voltage up. The lower level modules and other skills become entirely useless, and these 2 skills will be the only useful ones in your arsenal for the most part. 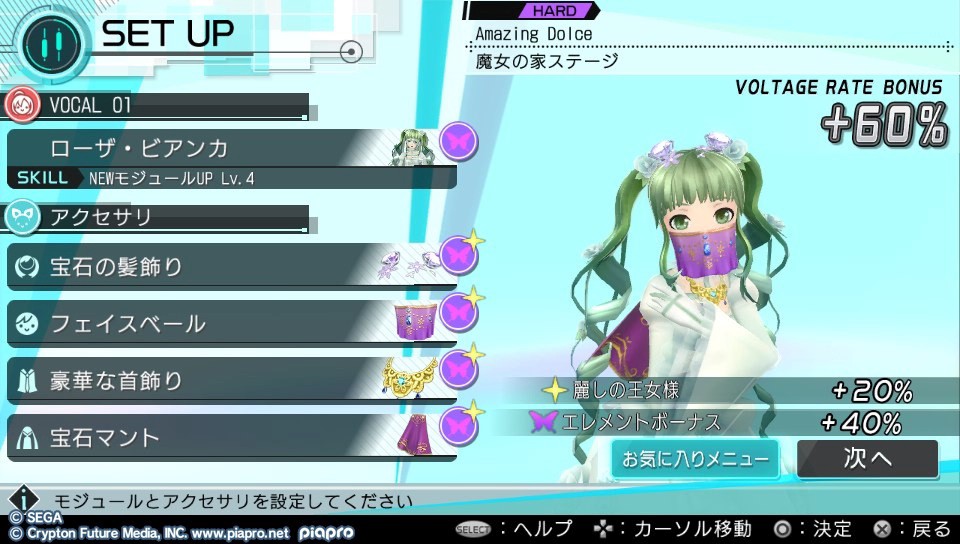 They’ve also gave a “purpose” to the accessories which are just cosmetic accessories in previous games. However they fail to have any real purpose, as once you’ve obtained the best accessory combination for each element that grants the 40% boost there is no point to using any other accessories. I saved load outs for each of the magic combinations and never looked back. There’s a module skill for increasing accessory drop rates but it’s already easy to obtain all of them normally so that’s another useless skill.

In the past diva games, there has been a “Diva Room” mode which is usually my least favorite part, but required to 100% it. You could give presents to the vocaloids and play games to raise their affection level. In X this mode is absolutely awful. They raised the max affection level for each vocaloid to 10 from 5, making it an INSANE grind to get max level which is required for several trophies. You can no longer play games with the vocaloids, you can only give presents. Now you can spam presents as much as you want but they give so little affection per present it will take forever to get to max level that way.

The only way to effectively raise affection is fulfilling a vocaloid’s request for a present, for example if they want a something sweet you can give them a cookie which would increase the affection much more than regularly giving a cookie. This may not sound bad, however you cannot start a request at will, they are prompted randomly at the end of a song. There’s no rule or behavior for it, but it will randomly prompt you sometimes at the end of a song. Randomly. Some people online critisize the requests for being hard to understand if you don’t understand Japanse, but I won’t mark the game down for this because well, it’s in Japanese… 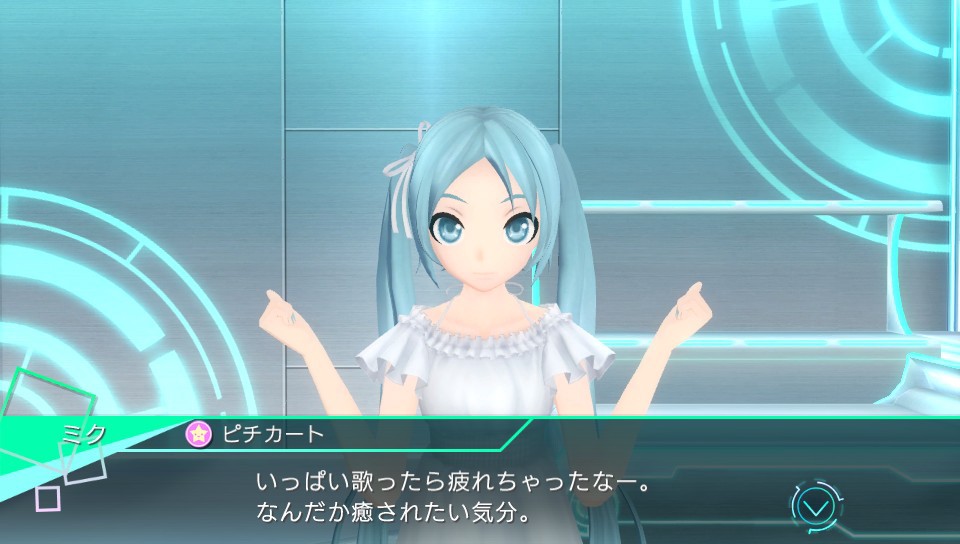 Weebs can’t decipher what she wants

X also introduces another mode called “live quest” (not area quest), and medleys which are one of the few additions I actually like. They allow you to chain together several shortened versions of songs into one live show. You can create a custom mix of 3 of your favorites and play them as a show basically. This is quite cool but again suffers from the same equips and RNG of everything else in the game. One time I got a perfect (full combo) on a live quest and still failed because I didn’t have the proper module or accessory so my multiplier was not high enough. This is maddening.

This game also only contains 24 songs (and 6 medleys). F has 44, F2nd has 40. This is a step back in the one major thing I care about in a rhythm game, the song collection. In addition, of those 24 songs, 20 feature Miku as the main singer and 22 have Miku in them. I like Miku but there should be more variety in vocaloids, as there’s 6 of them. Another disappointment, and there’s not even a Rin & Len song in this game. 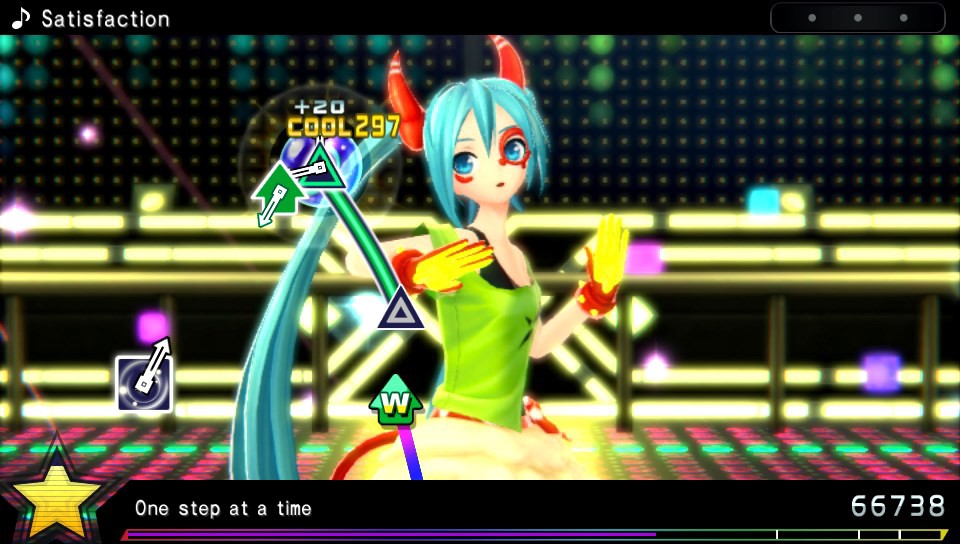 The PVs in this game are also lackluster, they are all on a stage with no story. Past games featured full story scenes movies in the background of the song which are quite cool and tell the story of the song. In this game there is none of that, literally all of the songs are just dancing on a stage. I could excuse this if the song selection was wider, but in my opinion this is just a disappointment with only 24 songs with no quality PVs.

Several other features such as skins, edit mode, and loading screen art are also gone. In F and F 2nd you could customize the GUI of the rhythm game with several art presets called skins. I never used this feature that much but there’s no reason to remove it and it’s no longer here. Also previous games had fan art on the loading screens which was nice to look at, this is replaced with a generic loading screen in X. And edit mode which allows you to create custom beat maps doesn’t exist anymore. No idea why all of these things were removed, probably just laziness.

I guess I should also mention that they tried to shoehorn in a “story”, which I started skipping all the text of after the first half hour because it’s about as interesting as something a first grader would write for his homework assignment. 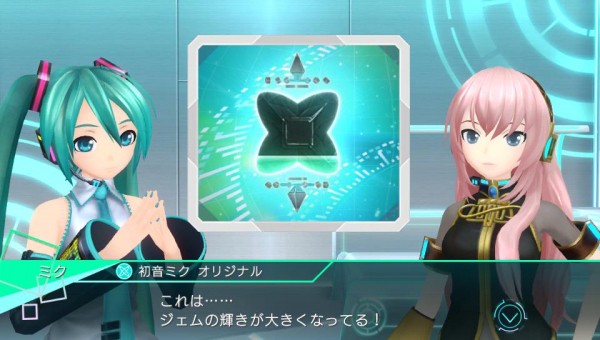 For completionists, this game is hell for grinding with all the random drops, and increased max level of 10 in the diva room. I am 85 hours in but still not close to getting the platinum. I should also mention that the area quest mode requires you to play each song with challenges after beating the 4 main difficulties (easy, normal, hard, extreme). These “challenges” do stupid stuff like make the notes waver, make the notes hidden, make the notes go super fast. This is just distracting and not fun, but to 100% the game you have to clear about 5 challenges on each song. The last of which is 3 modifiers on extreme difficulty, not fun at all.

The game is fun normally, but how about a mode where you can’t see where the hell the notes are going

And to get the right random drops to obtain all the modules you’ll be playing songs over and over over and over and over again. By the end of your PSN platinum experience you will hate even your favorite songs from trying to get the correct module and item drops. Because you have no control over this, if your luck is bad you can be repeatedly screwed with nothing you can do. This is entirely personal opinion, but I also didn’t care for a lot of the songs in the game. In fact I hate a majority of the “chaos” songs. And the game really does force you to play ALL the songs many times for completion.

Project Diva X tries to make some changes to the well tested formula to add RPG like elements and expand the game. But it fails badly on most of these ventures and creates something that is reliant on luck, equips, and other factors out of your control. It may be interesting enough to hold the attention of a casual player for a few hours, but for a seasoned veteran of the series, Project Diva X is a few steps in the wrong direction.